Eto’o has expressed his dissatisfaction with Okocha’s lack of recognition, calling it “the injustice of world football.” 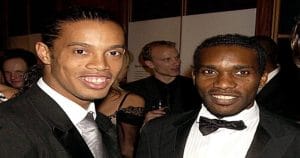 Okocha had a remarkable career spanning nearly two decades, winning the Africa Cup of Nations with the Super Eagles in 1994.

In 2004, the former Bolton Wanderers midfielder was named to Pele’s list of the sport’s 125 living legends, one of just four African players to do so (together with Abedi Pele, George Weah, and Roger Milla).

Okocha also helped Ronaldinho find his feet in European football when he was at Paris Saint-Germain.

But, whereas Ronaldinho went on to win two FIFA World Player of the Year titles and a Ballon d’Or, Okocha never came close to collecting any of those major accolades before retiring in 2008.

According to Onvoitout, Eto’o stated, “It’s the injustice of world football.”

“What we saw Ronaldinho achieve a few years ago, Jay-Jay (Okocha) had done 10 or 15 years earlier, and he never got the credit.” And that’s exactly what happened in Africa.”