Joe Cole and Rio Ferdinand, both former Premier League players, have identified the four favourite clubs to win the Champions League this season.

Following the conclusion of the round of 16 second-leg games on Wednesday night, Cole and Ferdinand announced their favourite clubs to win the Champions League. 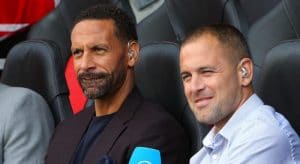 “The other English teams, Man City and Liverpool, are favourites for me and it’s a flip of a coin between them on the day. And then I put Bayern just above Chelsea.”