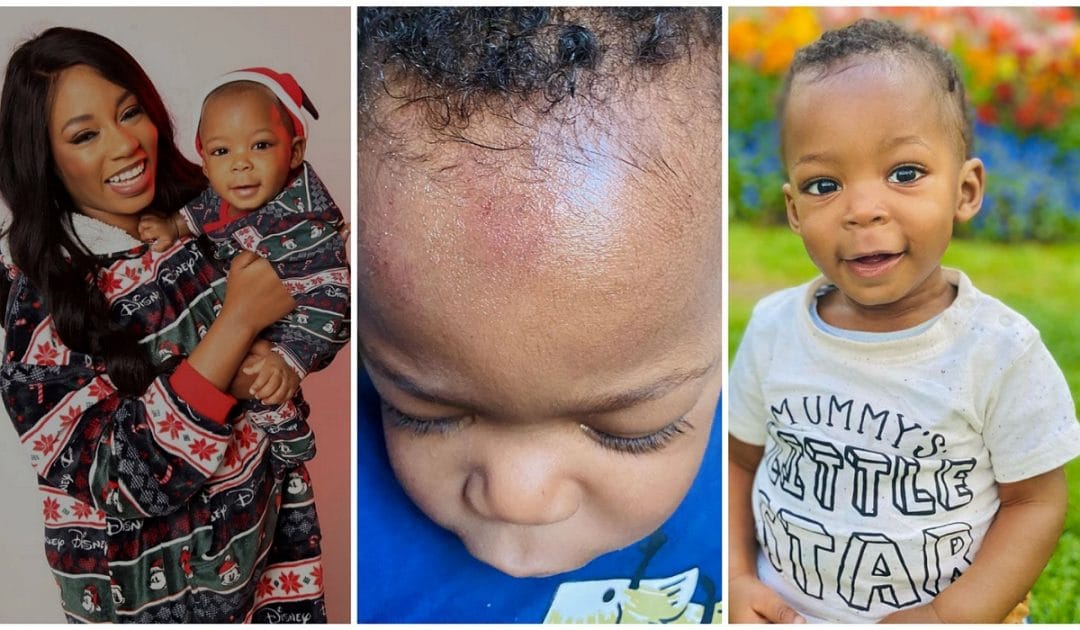 Reality TV star, Khafi Kareem has revealed how her son has been left bruised after he grazed his forehead against a log of wood.

The former BBNaija housemate took to her Instagram page where she shared photos of her baby bruising.

Taking to her Instagram page, Khafi wrote, “My baby boy is greeting everyone Happy Easter over on his page @miraclemalakai 🥰 But swipe to see the actual main photo of this post and prepare for a LONG caption below (Trigger Warning: baby bruising/ blood) 👉🏾.

The weather is getting warmer so we’ve been taking Malakai out to play a bit more. I hadn’t really taken him out to a proper kids park just open green spaces etc. But earlier this week I thought yes let’s go to a kids playground and let you play a bit.

The thing is kids’ playgrounds don’t always have grass on the floor, they sometimes have a rubbery turf for the floor or in this park’s case, a mix of grass and wooden bark pieces in an attempt to look more nature-like (I think?!).

ANYWAY one part of the play area where we were sat had seating made out of tree logs. And when Malakai had finished playing on the floor and trying to put as many sticks in his mouth as possible lol, he then reached up for me to carry him and as he did, he slipped and hit his head against the log where I was sat, grazing his forehead and bleeding in the process 😢.

Now up until this point I had never seen my baby get really hurt or have an injury as such. It was a shock to the system and my heart broke watching him get hurt and not being able to stop it from happening. He cried and cried but was really brave and soon forgot that anything had happened to him, but I didn’t!! I felt so bad and I was literally contemplating never bringing him to the park again as I can’t risk my heart breaking every time he slips or falls (yep first time mum problems!). I also felt like beating up the log that had hurt him lol. I was so upset that my son went through that pain.

And then it made me think… What on earth did God feel when he sent down his son on purpose, knowing he would be bruised, he would be afflicted and hurt for no just cause? And not even for people who appreciated him, for the very people who were cussing him and beating him, sending his son to die for them (US!).”