The arrival of Marquinos from Sao Paulo has been announced by Arsenal.

The Gunners have signed the 19-year-old to a long-term deal. 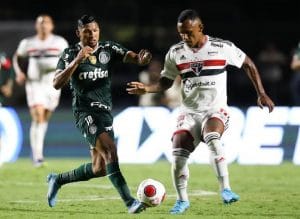 Marquinhos grew up in the Sao Paulo development system before breaking into the first-team squad and made his debut in July at the age of 18 years old.

During his stint with Sao Paulo, he made 33 first-team appearances and was a member of the club that won the Campeonato Paulista in 2021.

The new signing will fly to London from Brazil in the coming weeks to begin pre-season training with his new colleagues.

Technical Director, Edu said: “We’re delighted to have completed the transfer with Sao Paulo, as Marquinhos was a player we had been watching for a while. At 19, he is still very young, so he is a player for the future. We look forward to Marquinhos now joining us for pre-season, making his new home, and continuing to grow and develop with us.”