Nagelsmann gives reason for his side’s defeat to Villarreal

Bayern Munich manager Julian Nagelsmann has explained why his team lost to Villarreal in the Champions League.

On Tuesday, Bayern Munich lost 2-1 on aggregate to Villarreal. 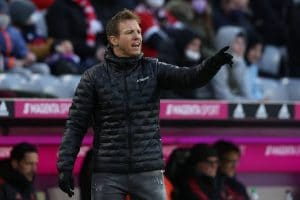 Last night in Germany, the second leg tie finished in a 1-1 draw, after Villarreal defeated Bayern Munich 1-0 in the first leg.

“We’ve been knocked out of the German Cup and the Champions League.” This isn’t good enough for Bayern, in my opinion.

At his post-match press conference, Nagelsmann stated, “We had the semifinals as our minimum target and we failed to achieve it.”

The manager revealed the defeat ranks among his top three losses.

“We knew they could defend. At the end we missed that second goal. The pressure was good. We defended well. We dominated them for much of the game, but it matters little because we’re eliminated,” he said.