Wayne Rooney and Patrick Vieira, former Manchester United and Arsenal players, have been inducted into the English Premier League (EPL) Hall of Fame.

The EPL’s official website describes the Hall of Fame, which was established last year, as “the highest individual honour presented to players by the Premier League.” 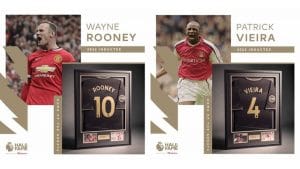 Rooney is the second-highest goal scorer in Premier League history, with 208 goals for Man United and Everton, with whom he won five league titles.

Vieira, on the other hand, guided Arsenal to three Premier League titles in 11 seasons, including the ‘Invincibles’ club that went undefeated in 2003/2004.

“It’s a wonderful honour for me to be named in the Premier League Hall of Fame, with such an incredible group of players who have previously been inducted,” Rooney stated in response.