According to Marca, Paris Saint-Germain striker Kylian Mbappe has decided to join Real Madrid this summer.

After rejecting a late bid from Liverpool, the French sensation agreed to join Santiago Bernabeu. 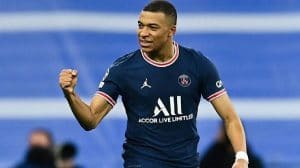 Mbappe’s PSG contract expires at the end of the season, and he is unlikely to sign a new agreement.

Real Madrid and Liverpool were both interested in signing the 23-year-old, but his current club pushed hard to keep him in the capital.

According to Marca, the World Cup winner has decided to join the Spanish champions.

According to the publication, Jurgen Klopp’s Reds have been pursuing the France international for years, and the striker has been ‘flattered’ by their recent offer.

Kylian Mbappe has established himself as one of Europe’s best players since joining PSG, netting 168 goals in 216 matches for the Ligue 1 club.

He has four league titles and three cups in five years in the French city.

He has been named Ligue 1 Player of the Year for the past two seasons and is now France’s leading goalscorer.